Once we completed a marathon script note session on our first day at The NSI Features First Program (which you can read all about in Scott’s post), we hopped in a convoy of taxis and made our way to Deluxe Toronto, just a few blocks away from our hotel.

Deluxe is a difficult organization to sum up in a single sentence. This is because they’re not just “a post house” or just “a processing lab”. The space we were invited to tour spans 62,000 square feet and takes up the majority of the top three floors of 901 King Street West here in beautiful downtown Toronto. It’s a brand new space for them, having been in their previous location for 25 years, so everything we saw was shiny and probably crazy expensive.

Or so we thought. 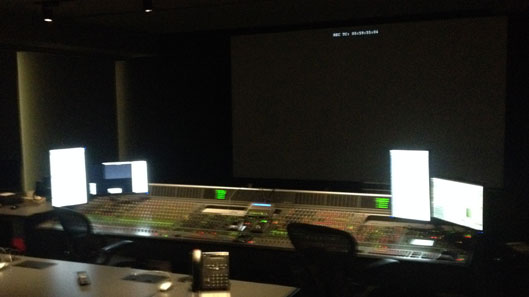 While the gear is clearly state of the art, Diane Cuthbert (Vice President Sales, Post Production) assured us that Deluxe is very interested in working with up-and-coming filmmakers and that we shouldn’t jump to the conclusion that Deluxe is not affordable or accessible for the low-budget producer or director based on their truly intimidating size and scope.

Yes, Guillermo del Toro, Atom Egoyan and David Cronenberg are regulars at the facility. But the team at Deluxe gets that the next generation of feature films is coming and they want to form relationships with those new filmmakers. Which is probably why they gave us so much delicious wine and cheese. 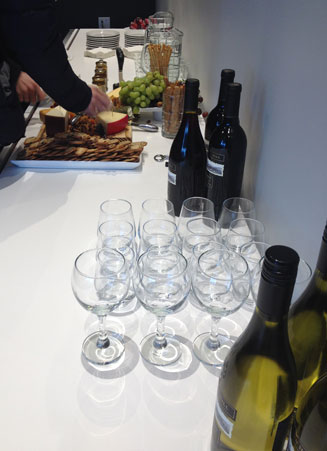 But what exactly does Deluxe do? Everything from dailies and on-location services to physical storage and asset management. Their website has a much better explanation than I could ever write, and it boasts what is actually an incredibly useful tool; a look at what they call “The Ecoysystem of Media & Entertainment”.

It’s been an exceedingly informative and thrilling first day here in Toronto. Tomorrow, Scott’s script, Synapse, gets the notes treatment. Looking forward to sharing what we learn from that session!

And don’t forget to check out our Features First Index Post to see posts from the entire week!