Here’s a daily dose of inspiration. Matt and I teach this philosophy to any aspiring filmmakers/actors who will listen, and I think it’s a major key to surviving and thriving in any creative industry.

Trying to make a living as a creative is tough. It doesn’t matter if you’re a writer, an actor, a director, or even a producer. If you’re not independently wealthy, you’ll often apply for all sorts of grants, tax credits, training programs, awards, etc. You’ll also have to pitch or audition or generally put yourself/your project at the mercy of others all the time.

And that means you’re going to hear “No”.

The “No”s start coming right from when you decide to get into the industry. When I first decided I wanted to be a filmmaker, I applied to USC’s film program two years in a row, and got my first tastes of “No”. When Matt and I applied to SAIT’s Film & Video Production program, we were fortunate to hear “Yes” but we were in the lucky 30 out of 400 applicants. That means over 90% of hopefuls heard “No”.

When we were accepted into the NSI Features First program (after hearing “No” in the past), the ratio was even less than 10%!

This is what makes the industry feel like a black, unwelcoming void; conspiring to keep everyone out. But that’s not the case at all!

Some say we need to develop a thick skin and learn how to move on after hearing “No”. Not true! Hearing “No” should be a VICTORY. It should inspire us to keep going. Why?

Think about it. If only 1 of every 10 people get a “Yes” in any given application, submission, audition, pitch, whatever, that means 9 people got a “No”. It sounds obvious, but unless you’ve got an oversized ego you should expect a 10% ratio of success.

Which means you need to earn 9 “No”s before you get a single “Yes”. 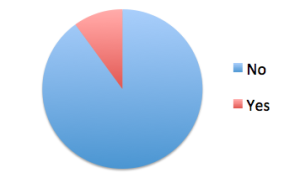 A “No” isn’t a failure; it’s one step closer! Not only that, a “No” forces you to reevaluate, take stock, refocus, face some realities you probably hadn’t considered before, and to do better next time.

You could even say that people who hear “Yes” too soon are being set up for discouragement, when the “No”s start coming and they wonder how they lost their mojo.

So keep applying, keep pitching, keep auditioning. Keep putting yourself out there, keep earning your “No”s, and when that “Yes” comes it’ll be even sweeter. You’ll know its value, and you’ll want to make the absolute most out of it.

Get out there and earn those “No”s! I’ll even get you started: want me to elaborate further on this subject?