In film school, you’re taught how to make a movie. You’re taught about screenplay formatting, storyboarding, how a camera works, how to light a scene and direct actors, how to hold a boom pole, how to edit footage and how to tell a story. It’s all great and important information, but it doesn’t shed light on how a movie actually gets made. The first step in the process isn’t pre-production, it’s development. Development is the longest step, it’s the most difficult step, it’s the step that most movies don’t make it past. 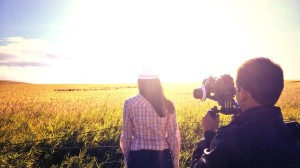 Without the NSI Features First program, this critical first step would still be a total mystery to me. I would know the term “gap financing” but I wouldn’t know what it really was. I would have a vague concept of things Distributors and Broadcasters like to see, but wouldn’t have a full understanding of “attachments”, “broadcast letters” etc.

Simply put, Feature First was an essential extension of my education in this industry. And that’s just the wisdom shared for the producers in the program!

Coming in as a writer, I got to see the impact “marketability” has on a screenplay, and how easily a story with limited market appeal is abandoned. The film industry doesn’t exist to make movies, it exists to make money. The sooner screenwriters can understand that, the sooner we’ll have bigger movies coming out of Canada. 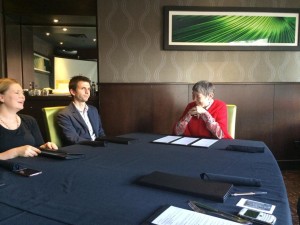 Lunch with Linda Seger…and Scott looking like a douche

I also learned how to focus a screenplay down to its core elements. With the help of NSI’s Melissa Kajpust, Shelly Tyler and Julie DiCresce, followed by another round of discussions with script-consultant extraordinaire Linda Seger, I became a stronger writer and Synapse became a far stronger script. The themes are clearer, the story is more focused, characters are more human, the dialog is way more fun. Synapse is now the script I always wanted it to be; I just didn’t know how to get it there until now.

The final essential element was taking me out of the Calgary Film Community bubble. Out west, sandwiched between the giant Vancouver and the titan Toronto, things are comparatively quiet. We don’t have many national events that bring networking opportunities, we don’t have the infrastructure to support a major industry (though it is growing). As a Calgary boy born-and-raised, I’d always heard about how “big” Toronto was compared to Calgary, but it doesn’t sink in until you experience it.

NSI Alumni hanging out at the Banff World Media Festival

Everyone you need to know isn’t in Calgary. Sure, we have talent in spades, we have landscapes that will take your breath away, but until our industry can compete at the big boy levels, we simply don’t have the muscle — and no amount of talent can change that.

Broadening my horizons and getting a glimpse of Canada’s film industry was a big eye opener for me. Meeting the decision makers whose opinions are not only cutting-edge, but whose words can shift the entire industry, was a gift.

And these are just educational benefits! I haven’t even touched on the credibility Features First lends to Synapse as a viable project, nor how much we’ll get out of our upcoming attendance at TIFF.

I could go on forever, but will leave you with this: I was already an ambassador for the Features First program after our first boot camp in March. Now, I can’t recommend it strongly enough, especially for filmmakers who don’t live near the action.

Back to the Index