Recently, Matt and I were invited to tour the offices and studios at 6 Degrees, a music and sound production company in Calgary. We knew facilities like this existed in town, but seeing it all in action blew our minds. Read on to learn more about these folks and how they help to perfect the other half of your movies (you remembered sound was important…right?).

6 Degrees is made up of about a dozen composers, producers, engineers and directors all working together “for a love of music, sound, and a desire to champion the work of Alberta artists and composers on a national and international level”.

Their work has earned them Emmy and Gemini nominations, among many other accolades, and they’ve worked with ABC, TSN, ESPON, Shaw, Sun News, Wind Mobile, GM, Volkswagon, Toyota, Telus and WestJet (to name a few).

Leading our tour was one of the company’s two full-time composers, Alec Harrison who, along with Andrea Wettstein, took home a Rosie this year for their work on FlyOver Canada. On top of doing great work, Alec was a gracious host and a generally wicked guy…though we did chat a lot about Justin Bieber… 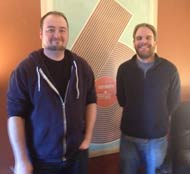 Located on 11th Ave SW, Six Degrees instantly feels like a cool inner-city creative business. Lots of laughter around the office, Friday beers, and an impressive collection of trophies on their mantle. 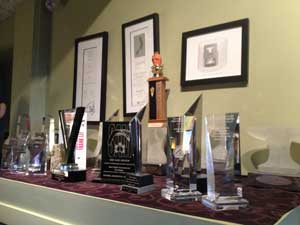 The most coveted trophy is for their annual pumpkin carving competition

They have a handful of studios, recording booths and mixing rooms, ranging from single-man workspaces to huge areas with room to lounge and watch them work their magic. 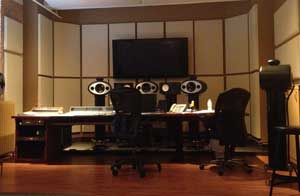 What’s so great about them?

Good filmmakers know that an audience will forgive bad picture, but they’ll leave the theatre if the sound sucks. Often, the separation between a film feeling low budget vs. high budget is the sound quality (this is becoming especially true as cameras get better and better), so spending time and resources on audio post-production is essential. 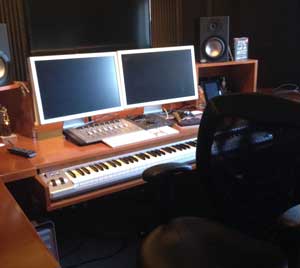 Six Degrees does great work, but we’ve been even more impressed by their commitment to storytelling. They understand how collaborative the filmmaking process is, and how important it is for every creative person to be engaged as a storyteller.

They commit to “tasteful sound design, subtle ambiences, cohesive dialogue transitions and dynamic mixes”, and can do anything from dialogue edits, sound design and mixing for corporate videos, to voice-over record and mixes for radio and TV commercials, to intricate 5.1 stereo mixes for major sporting event promotions (like the World Cup) and amusement park rides (like FlyOver Canada, which even had a full recording session with the Vancouver Film Orchestra!).

We could write a novel about this stuff, but suffice to say you should definitely check them out if you get the chance. Start with their nifty website and go from there. You can also check them out on Facebook and follow them on Twitter.

Thanks for reading and happy mixing!