Wow. I always thought production was the tough part of filmmaking. Now I’m wondering what the heck the easy part is!

As mentioned in our previous post, Matt and I were sponsored by the National Screen Institute to attend TIFF with our Features First Sci-Fi Thriller “SYNAPSE”. Our mission: whatever we wanted it to be.

This is where NSI sets us free, with the opportunity to act like grown ups and use the knowledge they’ve given us to keep our projects moving forward.

As one of the world’s major (unofficial) film markets, TIFF is brimming with distributors, broadcasters, sales agents and filmmakers from around the world descending on Toronto for 10 days of networking, parties, watching films, parties, meetings, buying films, and parties. TIFF was the perfect place to keep the ball rolling and get ever closer to a greenlight.

We began by turning to our Phase 2 homework: a well-researched list of broadcasters and distributors who would be a good fit for the project. We also expanded our list to include sales agents and potential co-production partners, to ensure we have plenty of folks to call when the time comes to get financing in place.

Our first emails went to the people who have expressed interest in Synapse: distributors, government bodies, banks, producers etc. whose paths we’ve already crossed in this crazy journey. We then reached out to folks on the list we didn’t know yet, armed with a great excuse for a cold-call.

Before we knew it, our calendars started filling up and we were on a plane to Toronto.

Our first day consisted of picking up our Industry Passes, getting the lay of the land and scoping out future meeting spots, and seeing one of the few movies we would watch at the festival. Then our meetings began…and continued almost back-to-back for the next five days.

Every meeting had a similar flow: handshakes, pleasantries, intros, pitch, discuss, “send me the script”, handshakes. Some were rushed as our contact bounced from one sit-down to the next, some were enjoyed over multiple drinks, spanning hours. Matt and I pitched and pitched until our pitchers were sore, but while we definitely hit our stride and developed a great rhythm, each meeting felt fresh and new.

Hanging out with NSI Alumni

Every person we met was exceptionally friendly (we are Canadians, after all), and Synapse never got a cool reception. We started to learn the beats where eyes would light up, we learned how to keep the enthusiasm strong even while outlining financing structures, and we became fluent at answering the tough questions (most of them centred around being first-time filmmakers).

We were also blessed to learn as much at TIFF as we did during our first bootcamp with NSI. The people in this industry are as generous with their knowledge as they are with their time, and we’re always delighted at how freely both are given to emerging filmmakers.

In between meetings, we kept our ears to the ground for parties and other networking events to attend. NSI was very helpful at getting invitations to some of the top parties at TIFF, and sometimes we were just lucky to know the right person at the right time.

Calgary’s entire film industry could fit in this room!

The parties were a whole other world. Rubbing elbows with celebrities, making new friends, pretzel walls, open bar every time. Between the meetings and the parties, we were lucky to get 5 hours of sleep a night.

Did we mention open bar? 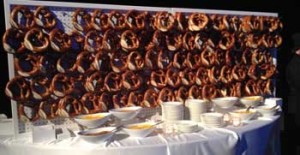 We caught the red eye back to Calgary on day 6, tired beyond belief, our heads still spinning. I crawled into bed at 3am, and when I woke up the next day, it felt like I had just spent 6 days living in someone else’s dream. Definitely a surreal experience.

A week later, my feet and my sleep schedule are still recovering (I’m shocked I haven’t gotten sick). But our goal was to make the most of this opportunity the NSI gave us, and I think we did the best we could, so I’m resting easy…or maybe that’s from exhaustion. 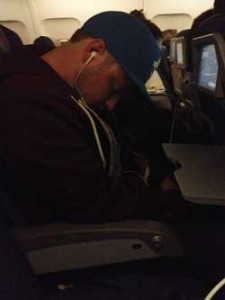 While nothing was set in stone during our time at TIFF, we’ve set up the dominoes. Now, we have the Features First award money to keep development moving, and this film inches closer to the first time I get to say “Action” on a feature film.